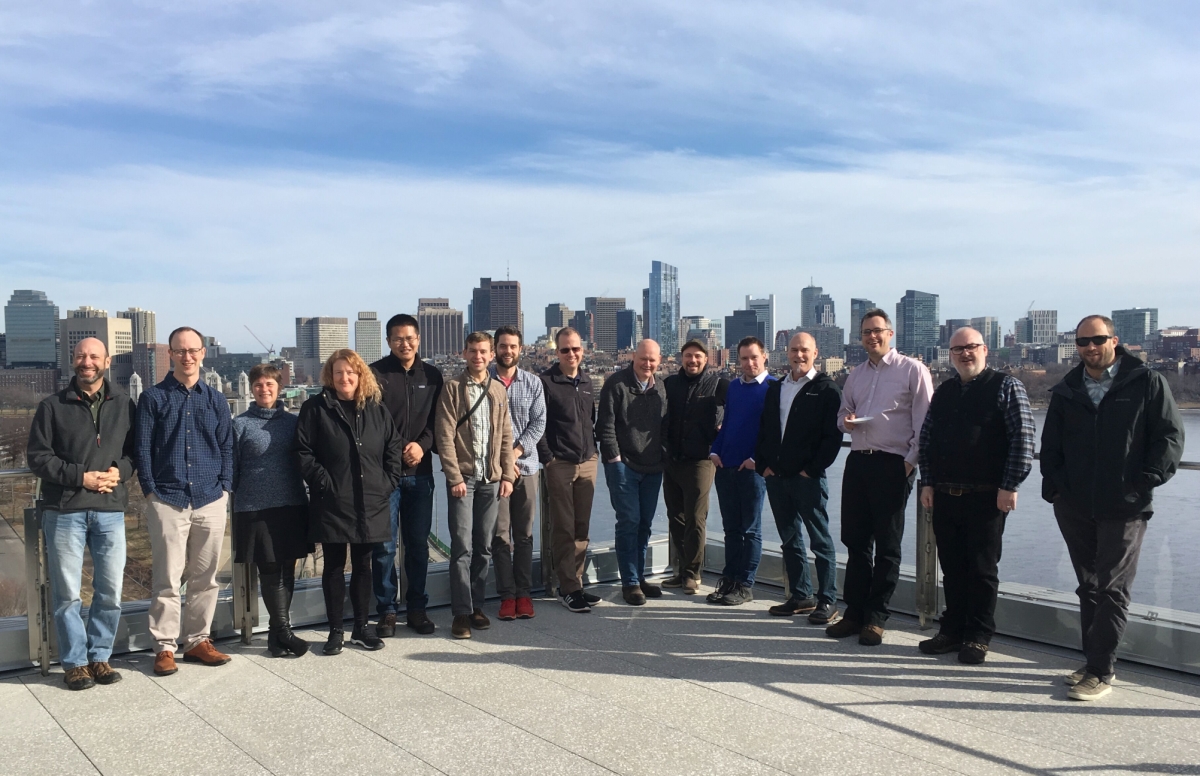 At a two-day workshop held at MIT, January 28 and 29, a subset of the CBIOMES team gathered to share a focused dive into the detail of phytoplankton macromolecular and physiological modeling, coupled with an immersive exploration of how best to integrate such models into larger scale models of marine plankton distribution.

A central goal of CBIOMES (the Simons Collaboration on Computational Biogeochemical Modeling of Marine Ecosystems) is to be able to characterize the biogeography of plankton and bacteria in the surface ocean and understand its impact on large scale biogeochemical cycles.

“The connections between the way the organismal community functions and biogeochemistry is, in part, through their elemental composition and the way those elements flow through the system,” explains CBIOMES Director and MIT lead investigator Mick Follows.

“Once we are able to model how a particular species organizes its elemental and macromolecular composition in response to its local environment, or by understanding how competition between different species and related changes in community structure would lead to a different composition of individuals in aggregate, we begin to discern the mechanisms determining biogeography.”

With MIT CBIOMES researchers working on both macromolecular models and the GCMs (general circulation models) they will ultimately incorporate them into, the MIT group decided to convene a workshop tightly focused on questions of macromolecular composition and physiology, with the goal of accelerating efforts to develop and apply physiological models of marine microbes in their large scale ecological and biogeochemical simulations.

Participating in the January meeting were CBIOMES researchers who are either working on describing systems that resolve the macromolecular composition of organisms or are involved in collecting and analyzing data to guide the design of those models. To those were added several CBIOMES statisticians to help us think about ways in which the data and models can be formally brought together, and finally, GCM modelers seeking to implement models of macromolecular composition and function as sub-models within biogeochemical and ecological simulations at the basin scale.

A particular goal for this meeting was to collaboratively work on current challenges rather than simply reporting on achievements so that although there were a number of formal presentations each day, a generous amount of time was set aside for plenary as well as small group discussion with talks intentionally chosen to fuel idea sharing and

Zoe’s presentation was followed by nuts and bolts discussion of the several complementary efforts underway within CBIOMES to model phytoplankton physiology and macromolecular composition centered around three presentations:

“Thermodynamics and macromolecular models” (Joe Vallino, MBL) which extended these ideas to demonstrate how rather than simply thinking about mass balance, an alternative approach is one built on energy flow and the constraints on that.

“Physiological adaptations in Flux Balance Analysis” (John Casey, UH) who drilled deeper still, revealing a network of yet finer scale metabolites and pathways prompting fresh thinking about opportunities to use this fine scale information to either inform coarser scales or hierarchically embed within them.

Members of the MIT CBIOMES team Stephanie Dutkiewicz and Chris Hill then shared their thoughts concerning challenges and opportunities inherent in integrating macromolecular models into GCMs.

Finally, Andrew Irwin (Dal) rounded out the formal programming with a helpful tutorial on parameter estimation for ODEs using a Bayesian approach with Stan.

Follows was particularly impressed with the level of engagement and caliber of the discussion the talks engendered both during the presentations and in the multiple breakout sessions that suffused the meeting. “What I think was different about this meeting than say the one we had last May is that we got down into the details and really discussed things in depth,” says Follows. “We didn’t just come away with a quick overview of what’s going on: We were able to each learn more precisely how each other’s models work, the kind of analytical tools each of us is using, and to think about ways we can make them work better together.”

Follows was particularly excited about the cross-fertilization the meeting allowed. “What was so exciting was witnessing the exchange of ideas and techniques. While we are all in the same project its breadth means that, although we are working closely on related questions, there’s still quite some separation of expertise and knowledge. I felt excited seeing the level and depth of interaction.”

“I certainly came away having a much better feeling for what the opportunities are particularly in terms of cross-fertilization and new approaches emerging by combining different perspectives and my sense was this was a feeling shared around the room. My hope is that as the project matures, we’ll look back on this meeting and see that it seeded conversations that turned into new ideas and directions that would not otherwise have happened; useful new directions, where cross-fertilization of understanding, ideas, and tools has happened that facilitates us to do a better job of answering the questions we wanted to than if we’d worked separately.”