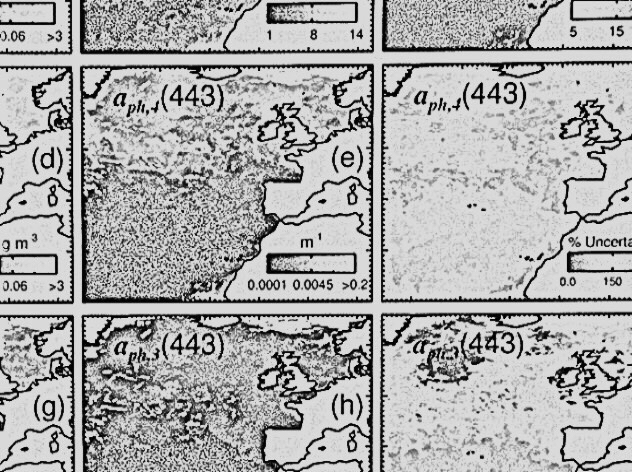 The PML-CBIOMES team led by Shubha Sathyendranath is actively engaged in developing new and improved products to extract increased detail from satellite color data. A new paper describes a new multi-population and absorption model they have been working on.

Ocean color remains our only window into the pelagic ecosystem at synoptic scales. It is a rich source of data, and chlorophyll concentration is the principal product, which provides valuable information on how the light from the sun (the energy source for the entire ecosystem) is coupled to the marine biota through the pigments contained in phytoplankton.

The absorbed energy is used by phytoplankton to produce organic carbon (marine primary production), and the light at the sea surface (another product available routinely using satellite data) can be combined with chlorophyll concentration from ocean color, to estimate marine primary production at the global scale, using models of light penetration, and photosynthesis.

In a paper published in the journal Sensors in October, PML-CBIOMES members Bob Brewin, Shubha Sathyendanath, Trevor Platt and others from PML (Plymouth Marine Laboratory) and the UK Met Office present a model to estimate the spectral phytoplankton absorption coefficients of four separate phytoplankton groups (picophytoplankton, nanophytoplankton, dinoflagellates, and diatoms) as a function of total chlorophyll-a concentration, and sea surface temperature.

Integrating the new multi-population absorption model into a simple model of ocean color, the team was able to illustrate the influence of changes in sea surface temperature on phytoplankton community structure, and consequently, the blue-to-green ratio of remote-sensing reflectance. Also included in their paper is a method of propagating error through the model which they illustrate by mapping errors in group-specific absorption coefficients using a satellite image.

“We envisage the model will be useful for ecosystem model validation and assimilation exercises as well as for investigating the influence of temperature change on ocean color,” says Brewin.

“Data assimilation model work based on the assimilation of chlorophyll into an ecosystem model with the same four groups by co-author Stefano Ciavatta (Ciavatta et al 2018), has already demonstrated the value of the new products,” notes Shubha Sathyendranath. “Now we are looking forward to assimilating absorption in the four groups into the model to see if biogeochemical fluxes improve.”