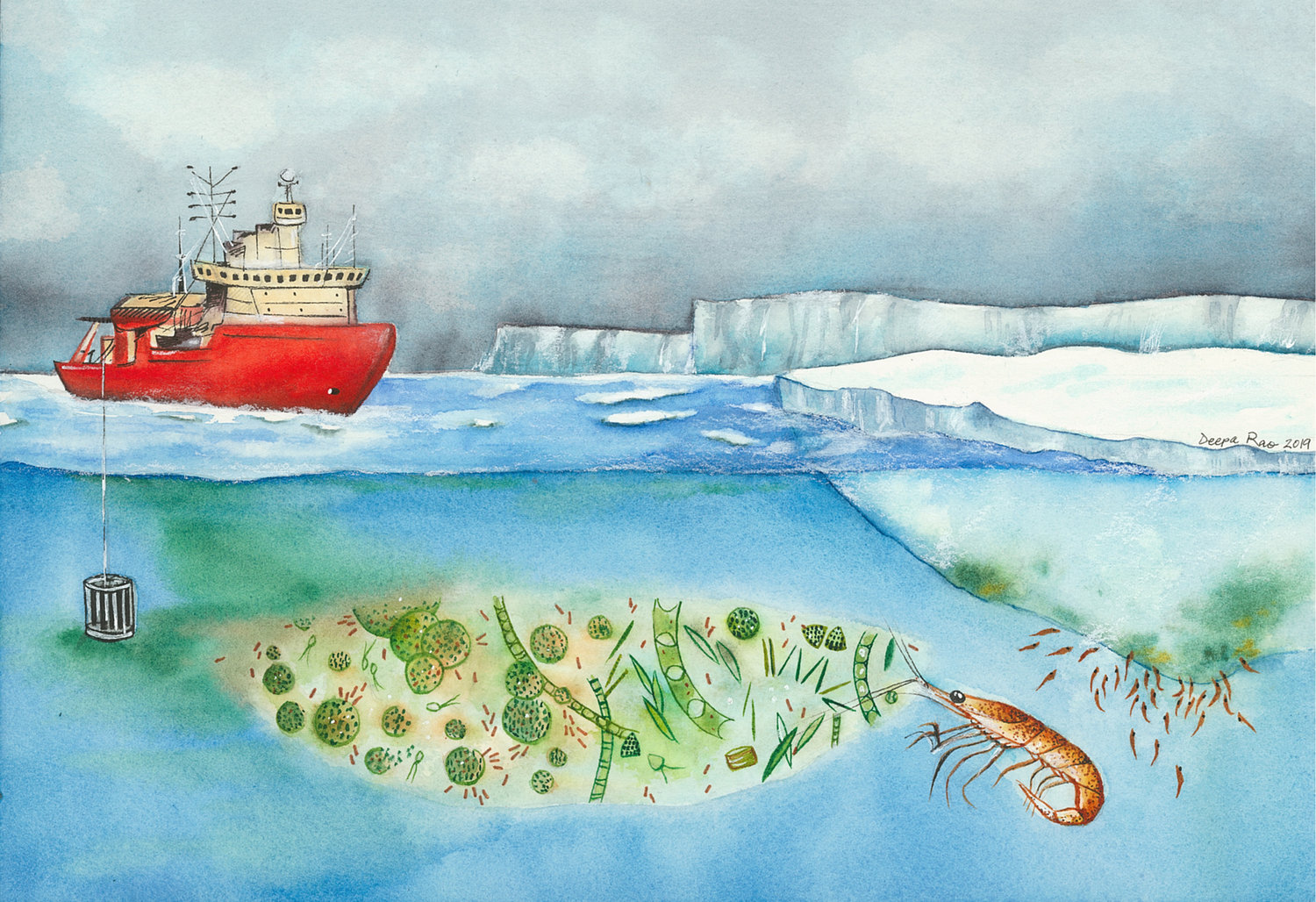 After weeks of breaking through thick sea ice to arrive at our sample station, all of us exhaled a sigh of relief, only to inhale the frigid Antarctic air saturated with what some have called, “the scent of the sea”: the pungent smell of dimethyl sulphide, a climate-active gas produced by microscopic marine plants. We were in the midst of a flourishing phytoplankton bloom so large it could be seen from space and smelled from miles away. I was in awe because until that moment, I had only studied and grown the phytoplankton responsible for this bloom, Phaeocystis antarctica, under controlled lab conditions in a small flask. Thanks to the efforts of 50 crew members and scientists deployed aboard an NSF icebreaker, the R/V Nathaniel B. Palmer, I was able to witness firsthand the subject of my research: how microbes and their interactions—both invisible to the naked eye—collectively impact an entire ecosystem.

An Antarctic mystery: microbial interactions driving the ecological cycling of cobalt and vitamin B12

For nearly 80 days at sea, we transited along Antarctic continental shelves from the Amundsen Sea to Terra Nova Bay in the Ross Sea. These marginal seas are the most productive areas of the Southern Ocean, where phytoplankton are fueled by continuous sunlight during summer in the Antarctic circle and essential metals from glacial and sea ice melt. These blooms ultimately sequester significant amounts of atmospheric carbon dioxide through photosynthesis, biosynthesis, and export of particulate carbon (in cells) to ocean depths. In Antarctic seas, phytoplankton communities are typically dominated by one of two microalgal groups: diatoms or the colonial Phaeocystis antarctica. Recent observations in some areas of the Ross Sea (Terra Nova Bay) show a shift in the phytoplankton community from diatoms to P. antarctica. However, what combination of environmental factors determine community composition is not fully understood.

The mission of our scientific research cruise called CICLOPS was to examine how cobalamin (vitamin B12) and iron co-limit phytoplankton species and to investigate if these micronutrients control phytoplankton community composition in Antarctic seas. I was there to examine the curious case of vitamin B12 cycling, an example of a non-consumptive interaction between phytoplankton and bacteria that has ecosystem-scale impacts.

Nearly a decade ago, scientists discovered that both iron and vitamin B12 could limit the highly productive phytoplankton communities of the Ross Sea. This was the first oceanic region shown to be limited by a vitamin, indeed by any organic resource. It is expected that B12 can not only limit overall productivity here, but that vitamin availability can modulate the community composition. Like us, most eukaryotic phytoplankton require vitamin B12 for protein and DNA synthesis. Vitamin B12 contains the trace metal cobalt, is found in vanishingly low concentrations (picomolar), and can only be synthesized by certain bacteria and archaea. Ultimately, phytoplankton depend on these microbes for their vitamin supply. It is likely that in exchange for B12, bacteria benefit from an increased supply of their food source: organic carbon produced by the growing phytoplankton.

The ocean microbiome has many such beneficial interactions that are complex and important but challenging to study, and thus have not been integrated into most global marine ecosystem models. As a microbial oceanographer, I focus on these relationships—like the exchange and cycling of organic resources like B12—that are the “invisible threads” binding microbial communities together.

During our two-month cruise, we transited nearly a third of the way around Antarctica, hugging the continental shelves and chasing blooms in the polynyas (seasonal seas that form due to melting sea-ice), from a P. antarctica bloom in the Amundsen Sea to a diatom-dominated community in the Ross Sea. The science team used trace metal-clean techniques to collect seawater and filter large volumes, which we studied looking for information on phytoplankton community DNA, RNA, and proteins, as well as nutrient concentrations. We also incubated some samples onboard, in which we tested whether the local community was limited by iron, B12, or a set of other potentially limiting nutrients.

Onboard, for my own incubation experiments, I used radio-labeled cobalt chloride (CoCl2) and vitamin B12 to track the cycling of these micronutrients within the natural seawater microbial community. While cobalt is part of vitamin B12, it has other biological functions and thus the two cycles are related but distinct. To date, we collected the largest set of concurrent cobalt and B12 uptake rates, with hundreds of samples that allow us to distinguish how fractions within the natural seawater microbial community (e.g., larger phytoplankton versus bacteria) drive the ecological cycling of these essential micronutrients.

My research has me traveling between the field, lab, and office from Woods Hole to Cambridge, MA. While at Woods Hole Oceanographic Institution (WHOI), I work with the Saito Lab to study the response of Phaeocystis antarctica single cells and colonies to B12 and iron limitation by analyzing their growth and metabolic response through measuring their cellular metals and proteins under different conditions. While at MIT, I work with the Follows lab and MIT Darwin Project to develop models of P. antarctica life cycle stages to improve their representation in global marine ecosystem models. Between both locations, I analyze the field data to understand how the physical environment and local marine microbial community drive the patterns of cobalt and B12 uptake we observed while at sea. In my research, I strive to have a multi-scale approach to study how microbial processes and interactions can impact ecosystem structure and dynamics, with feedbacks on the environment and ultimately climate. Oceanography is an inherently interdisciplinary science, a necessary approach to study complex ecosystems from multiple spatial, temporal, and biological scales.

My experience researching polar microbial oceanography in the field, lab, and in models has further motivated my interest in understanding Antarctica’s role in a changing global climate. Increased glacial melt and decreased sea ice are altering the supply and availability of trace metals like iron and cobalt to Antarctic marine microbial communities. I believe that by shining a spotlight on the climate change impacts to Antarctica’s sensitive microbial ecology, we can highlight the immediate consequences of climate change on the base of polar ecosystems. Such a fundamental change to the base of the Antarctic food web has ramifications for ocean life from krill to whales, global fishers, ecosystem stability, and Earth’s climate. The changes occurring in the Antarctic region affect us all, despite how remote the frozen continent and ocean may seem.