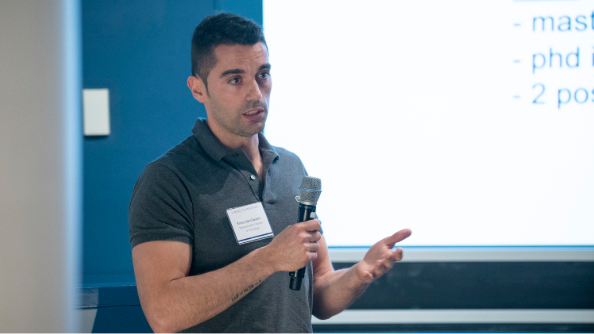 A warm welcome to postdoc Enrico Ser-Giacomi who joins the MIT CBIOMES Group this month.

Enrico is a physicist with expertise in transport and mixing phenomena in geophysical flows, mainly in the ocean and from a Lagrangian perspective, network theory, theoretical models for community assembly, and plankton ecology and biogeography.

As a member of CBIOMES Enrico will be modeling composition and interactions between local plankton communities in order to study the interplay between physical, environmental and biological drivers in plankton community assembly.

Enrico holds Bachelor and Master degrees in Physics (2008) and Theoretical Physics (2011)  respectively from the University of Perugia, Italy.  He has a PhD in Physics (2015) from the University of the Balearic Islands, Spain. Before coming to MIT he was based in Paris where he completed a postdoc at the École normale supérieure researching plankton abundance distributions followed by a second at the Sorbonne studying climate change impacts on Lagrangian transport in the Mediterranean Sea.