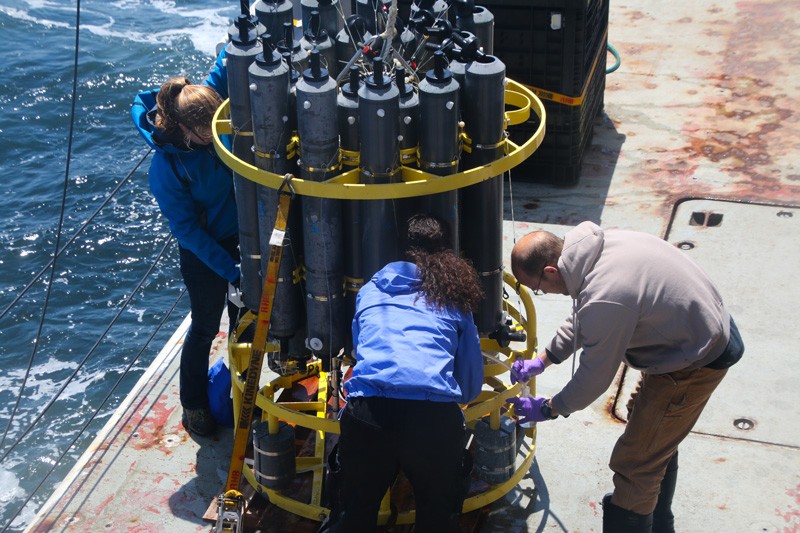 Member of the PML-CBIOMES Group Bror Jönsson has been working with Wei-Jun Cai of the University of Delaware and others on a study seeking to characterize ocean acidification throughout coastal North America.

Read this at U. Delaware News

One of the earth’s biggest allies in the fight against global warming is the world’s oceans. Since the industrial revolution, the burning of fossil fuels has caused carbon dioxide, the dominant greenhouse gas, to be released into the atmosphere. Approximately 25 percent of that carbon dioxide is taken each year from the atmosphere by the world’s oceans—without which, the earth’s atmosphere would have a higher greenhouse gas concentration and temperature.

While pulling the anthropogenic, or man-made, carbon dioxide from the atmosphere is good for the earth’s system, it leads to problems for the world’s oceans as dissolved carbon dioxide becomes carbonic acid and leads to ocean acidification, changing the chemistry of the world’s oceans and impacting some of the life forms within it. In particular, the organisms that use calcium to build their carbonate skeletons will have a harder time under acidified conditions.

To help determine the causes of ocean acidification on both coasts of North America, University of Delaware professor Wei-Jun Cai teamed with scientists the National Oceanic and Atmospheric Administration (NOAA) scientists, as well as professors and professionals from numerous research institutes, to conduct an in-depth study that looks at carbon dioxide uptake and ocean acidification in the coastal oceans of North America.

While ocean acidification in North America has been studied in smaller, specific areas before, this is the first time that researchers have compared data from the east coast, west coast and Gulf of Mexico locations.

Through this work, researchers were able to identify the similarities and differences of ocean acidification on both coasts, as well as point out hot spots that will be particularly vulnerable to ocean acidification in the future. The results of that research were recently published in Nature Communications

Cai said that in order to adequately research ocean acidification, the work cannot be done by just a few people from one region or even one country. This study involved researchers in the United States, Mexico and Canada.

“In North America, as well as globally, we’re trying to get as many countries involved as possible,” said Cai, Mary A.S. Lighthipe Professor in the School of Marine Science and Policy in UD’s College of Earth, Ocean and Environment.

For this particular project, the goal was to synthesize their findings to show how ocean acidification works in general for coastal oceans in North America and how those interact with the more localized physical and biological processes.

“Ocean acidification is everywhere, but this paper basically shows that, depending on the location, it can manifest very differently,” said Cai.

Sampling the same latitudinal locations on the east and west coasts, as well as the Gulf of Mexico, over the course of several research cruises, allowed the researchers to see different patterns for the east coast and the west coast of North America.

The near-equilibrium of ocean waters of with the atmospheric carbon dioxide with controls the large pattern of ocean acidification on the east coast and Gulf of Mexico while on the west coast, the ocean acidification is enhanced by an additional process known as upwelling.

Northern waters on the east coast are particularly sensitive to atmospheric carbon dioxide uptake, as the colder ocean temperature allows the ocean to take more carbon dioxide from the atmosphere.

Rising carbon dioxide levels upset the balance of carbonate ions in seawater, making it difficult for some organisms, which have shells composed of the mineral calcium carbonate, to form their shells. Many of the organisms that are affected are critical for ecosystem health.

“The northeast and western coastal communities are very aware of this potential harm that ocean acidification could bring to their region because the marine organisms become more vulnerable sooner in the northern waters,” said Cai.

In the east coast’s warmer southern waters, the researchers observed lower levels of dissolved inorganic carbon and a higher mineral saturation state, meaning that acidity is lower here when compared to the northern waters.

On the west coast, a section of the ocean is influenced by the California Current System (CCS), which extends from the United States and Canadian border to Baja California. The CCS is characterized by strong, cold currents, and wind-driven upwelling events.

Upwelling brings colder, nutrient-rich subsurface waters to the ocean’s surface to replace surface water that has been pushed away by winds. “The water from the subsurface has low pH—meaning high hydrogen ion concentrations—and high carbon dioxide, which causes stress to the biological system,” said co-author Richard Feely of NOAA’s Pacific Marine Environmental Laboratory (PMEL). “So the combination of the uptake of anthropogenic carbon dioxide from the atmosphere and the upwelling of CO2-rich low-pH water from below leads to enhanced acidification in this region.”

This study was the first time that the two coasts were compared side by side to explain their larger features.

“We tried to give the community, particularly the shellfish community or the stakeholders that care about the large-scale ocean acidification, the sense that both the northern waters and at these upwelling centers are most vulnerable to atmospheric CO2 increases,” said Cai.

Areas of concern include the CCS and northern-latitude coastal regions, such as the Gulf of Maine in the Atlantic and the Gulf of Alaska in the Pacific, as they are particularly sensitive and vulnerable to anthropogenic carbon dioxide forcing.

Cai said that this data collection would not have been possible without the large numbers of international collaborators. He is hopeful that by putting all of this data together, it can be used for future ocean acidification research. Cai also would like to expand this analysis to global scale.

The different regional collaboration and synthesis efforts to put data together is really important,” said Cai. “We need more of this kind of synthesis work to teach us how these different processes create regions of high and low vulnerability of marine life to ocean acidification.”