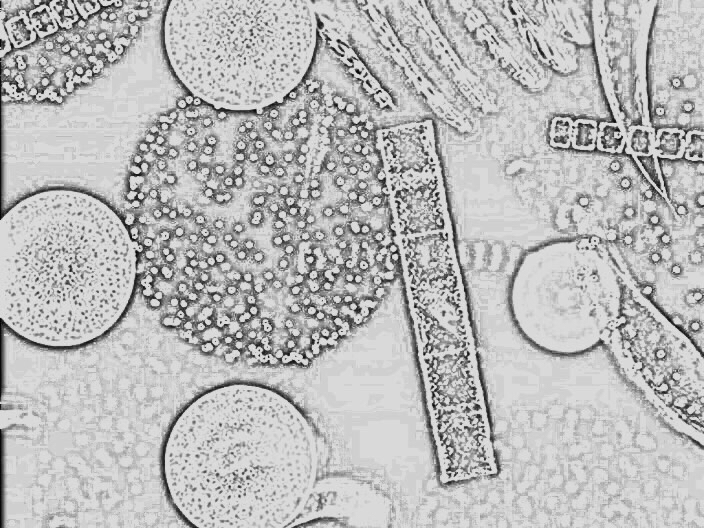 Understanding how marine microbes interact with one another and their environment requires a synthesis of empirical measurements, laboratory research, statistics, and modeling. To tackle this challenge, in July 2017 the Simons Foundation’s Life Sciences division launched the Simons Collaboration on Computational Biogeochemical Modeling of Marine Ecosystems (CBIOMES), a five-year project that unites researchers at nine institutions in the United States, Canada, and the United Kingdom. A key objective is to produce a global-scale map showing how the community of marine microbes changes over space and time. In their recently published annual report, the Division celebrates the power of collaboration in charting and understanding the biogeography of the world’s oceans.

Individually, ocean microbes can be as small as one-hundredth the width of a human hair. But collectively, they play an outsize role in the Earth’s climate and nutrient cycles. Microbes at the ocean’s surface form the base of the food web that sustains ocean life, and they carry out half the planet’s photosynthesis. In doing so, these microbes transform carbon dioxide from the atmosphere into organic matter that is drawn down into the deep ocean’s giant carbon reservoirs. And the diverse array of ocean microbes also mediates the Earth’s cycles of other elements, such as nitrogen and sulfur.

Yet our understanding of the marine microbial ecosystem is spotty at best. “There are large blank areas on the map where we don’t really know what’s living there,” says Michael Follows, an oceanographer at the Massachusetts Institute of Technology (MIT) and overall project leader for CBIOMES.

“We have top-level statisticians, people in the lab, people who like big computations, and people who like little bits of clean math,” says Follows. “But I think we’re all on the same page about the big goals of the project.”

Zoe Finkel‘s research focuses on how climate change interacts with physiological, ecological and evolutionary processes to influence phytoplankton communities and global biogeochemical cycles over a variety of timescales. Co-director of the Marine Macroecology and Biogeochemistry Lab at Dalhousie University, Canada, Finkel is the principal investigator for the CBIOMES project Developing a new trait-based understanding of microbial communities based on metabolic and elemental and macromolecular constraints.

Shubha Sathyendranath, an expert in the field of marine optics and remote sensing of ocean color. based at Plymouth Marine Laboratory in the UK is the principal investigator for the CBIOMES project Ocean Color and Ocean Biogeochemistry.

“If we understand how these things grow and what their needs are, it can tell you about large-scale patterns of nutrients and carbon dioxide. Understanding the small does tell about the large.”

Uniting the different scales of work such as Finkel’s and Sathyendranath’s is the role of CBIOMES’ modelers, who include Follows and his colleague at MIT Stephanie Dutkiewicz. Their team has created a gigantic simulation of ocean life including up to 300 different functional types of marine organisms that follow Finkel’s rules and other assumptions about how they will respond to changes in population distribution, nutrients, temperature, and ocean currents. Sathyendranath’s satellite analyses then provide a check on how well the model is capturing real marine microbial dynamics, and the models, in turn, allow Sathyendranath to fine-tune her own methods for understanding phytoplankton below the ocean’s surface.

“If we really understand what’s going on in the ocean, then one view should compare with another view,” Sathyendranath says. “Once we understand such things, we can begin to ask how the ocean ecosystem will respond to climate change.”

The MIT group’s model currently simulates the Pacific Ocean down to 2-kilometer resolution, a major step forward for simulations that capture both fluid physics and a diverse plankton population. “Just a few years ago I was very proud that we were able to achieve 20-kilometer resolution,” Follows says.

Tackling 2-kilometer resolution has been a huge computational challenge. “If you had asked me a few years ago, I would have thought that we wouldn’t do it in my career,” Follows says. Now, he says, the model “provides a platform for exploring ecological questions that no one else is looking at.”

CBIOMES’ statisticians, meanwhile, are working to complement the modeling approach with a more data-oriented perspective that aims to learn the rules of microbial interactions directly from the available information from cruises and satellites. “One grand challenge in CBIOMES is, say I have these ocean simulations, how do I match them to actual data?” says Christian Müller, a statistician at the Simons Foundation’s Flatiron Institute and another CBIOMES principal investigator. Developing a data-driven model to compare with the simulations is “the ultimate statistical question,” he says. “Coming up with new analysis techniques for these types of data is really interesting.”

The project is still in the early stages of figuring out how to meld the various teams’ different areas of expertise. “We have to find a common language,” Müller says. The project’s first annual meeting, in May 2018, was attended by more than 40 researchers. “It’s a wonderful group of people who have a really synergistic set of interests and skills,” says Finkel.

In addition to the annual meeting, the project carries out monthly online meetings consisting of short research talks and general discussion. And many subgroups of the different teams have met to study joint areas of interest. “There are all sorts of collaborations springing up that I wasn’t anticipating,” Follows says.

Sathyendranath, for instance, has already started several collaborations and has plans for more. “Some of these are people in different areas whom I might never have met except through this project,” she says.

By the time the project is done, “I think we’ll have a much better understanding of what controls the biogeochemistry of marine microbes,” says Finkel. For now, though, the project is “really exciting, but also overwhelming — because the ocean is big,” Müller says. “It’s uncharted territory, really.”

Adapted for style and substance from the 2018 Simons Annual Report made available online June 2019.