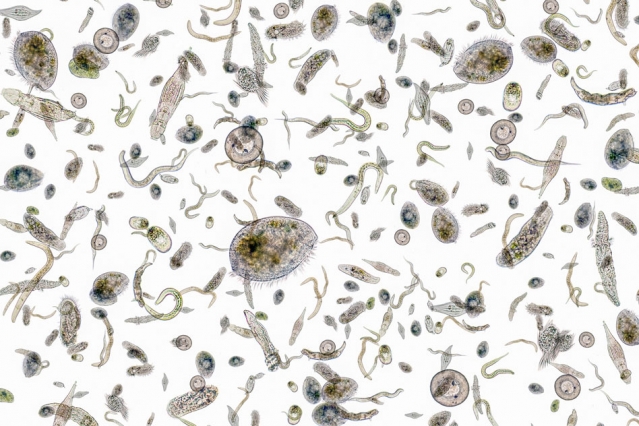 Historically, the oceans have done much of the planet’s heavy lifting when it comes to sequestering carbon dioxide from the atmosphere. Microscopic organisms known collectively as phytoplankton, which grow throughout the sunlit surface oceans and absorb carbon dioxide through photosynthesis, are a key player.

To help stem escalating carbon dioxide emissions produced by the burning of fossil fuels, some scientists have proposed seeding the oceans with iron — an essential ingredient that can stimulate phytoplankton growth. Such “iron fertilization” would cultivate vast new fields of phytoplankton, particularly in areas normally bereft of marine life.

A new MIT study suggests that iron fertilization may not have a significant impact on phytoplankton growth, at least on a global scale.

The researchers studied the interactions between phytoplankton, iron, and other nutrients in the ocean that help phytoplankton grow. Their simulations suggest that on a global scale, marine life has tuned ocean chemistry through these interactions, evolving to maintain a level of ocean iron that supports a delicate balance of nutrients in various regions of the world.

“According to our framework, iron fertilization cannot have a significant overall effect on the amount of carbon in the ocean because the total amount of iron that microbes need is already just right,’’ says lead author Jonathan Lauderdale, a research scientist in MIT’s Department of Earth, Atmospheric and Planetary Sciences.

The iron that phytoplankton depend on to grow comes largely from dust that sweeps over the continents and eventually settles in ocean waters. While huge quantities of iron can be deposited in this way, the majority of this iron quickly sinks, unused, to the seafloor.

“The fundamental problem is, marine microbes require iron to grow, but iron doesn’t hang around. Its concentration in the ocean is so minuscule that it’s a treasured resource,” Lauderdale says.

Hence, scientists have put forth iron fertilization as a way to introduce more iron into the system. But iron availability to phytoplankton is much higher if it is bound up with certain organic compounds that keep iron in the surface ocean and are themselves produced by phytoplankton. These compounds, known as ligands, constitute what Lauderdale describes as a “soup of ingredients” that typically come from organic waste products, dead cells, or siderophores — molecules that the microbes have evolved to bind specifically with iron.

Not much is known about these iron-trapping ligands at the ecosystem scale, and the team wondered what role the molecules play in regulating the ocean’s capacity to promote the growth of phytoplankton and ultimately absorb carbon dioxide.

“People have understood how ligands bind iron, but not what are the emergent properties of such a system at the global scale, and what that means for the biosphere as a whole,” Braakman says. “That’s what we’ve tried to model here.”

The researchers set out to characterize the interactions between iron, ligands, and macronutrients such as nitrogen and phosphate, and how these interactions affect the global population of phytoplankton and, concurrently, the ocean’s capacity to store carbon dioxide.

The team developed a simple three-box model, with each box representing a general ocean environment with a particular balance of iron versus macronutrients. The first box represents remote waters such as the Southern Ocean, which typically have a decent concentration of macronutrients that are upwelled from the deep ocean. They also have a low iron content given their great distance from any continental dust source.

The second box represents the North Atlantic and other waters that have an opposite balance: high in iron because of proximity to dusty continents, and low in macronutrients. The third box is a stand-in for the deep ocean, which is a rich source of macronutrients, such as phosphates and nitrates.

The team set relative concentrations of iron and macronutrients in each box, then ran the model to see how phytoplankton growth evolved in each box over 10,000 years. They ran 10,000 simulations, each with different ligand properties.

Out of their simulations, the researchers identified a crucial positive feedback loop between ligands and iron. Oceans with higher concentrations of ligands had also higher concentrations of iron available for phytoplankton to grow and produce more ligands. When microbes have more than enough iron to feast on, they consume as much of the other nutrients they need, such as nitrogen and phosphate, until those nutrients have been completely depleted.

The opposite is true for oceans with low ligand concentrations: These have less iron available for phytoplankton growth, and therefore have very little biological activity in general, leading to less macronutrient consumption.

When they compared their simulations to measurements of nutrient, iron, and ligand concentrations taken in the real world, they found their simulated sweet spot range turned out to be the closest match. That is, the world’s oceans appear to have just the right amount of ligands, and therefore iron, available to maximize the growth of phytoplankton and optimally consume macronutrients, in a self-reinforcing and self-sustainable balance of resources.

Lauderdale points out there may also be other unintended effects to fertilizing the Southern Ocean with iron.

“We have to consider the whole ocean as this interconnected system,” says Lauderdale, who adds that if phytoplankton in the North Atlantic were to plummet, so too would all the marine life on up the food chain that depends on the microscopic organisms.

“Something like 75 percent of production north of the Southern Ocean is fueled by nutrients from the Southern Ocean, and the northern oceans are where most fisheries are and where many ecosystem benefits for people occur,” Lauderdale says. “Before we dump loads of iron and draw down nutrients in the Southern Ocean, we should consider unintended consequences downstream that potentially make the environmental situation a lot worse.”

This research was supported, in part, by the National Science Foundation, the Gordon and Betty Moore Foundation, and the Simons Foundation.

Story image: Iron is an essential nutrient for phytoplankton growth, but a new study finds that artificially pumping vast amounts of iron into the oceans won’t bump up the microbes’ populations, or their capacity to sequester carbon dioxide.