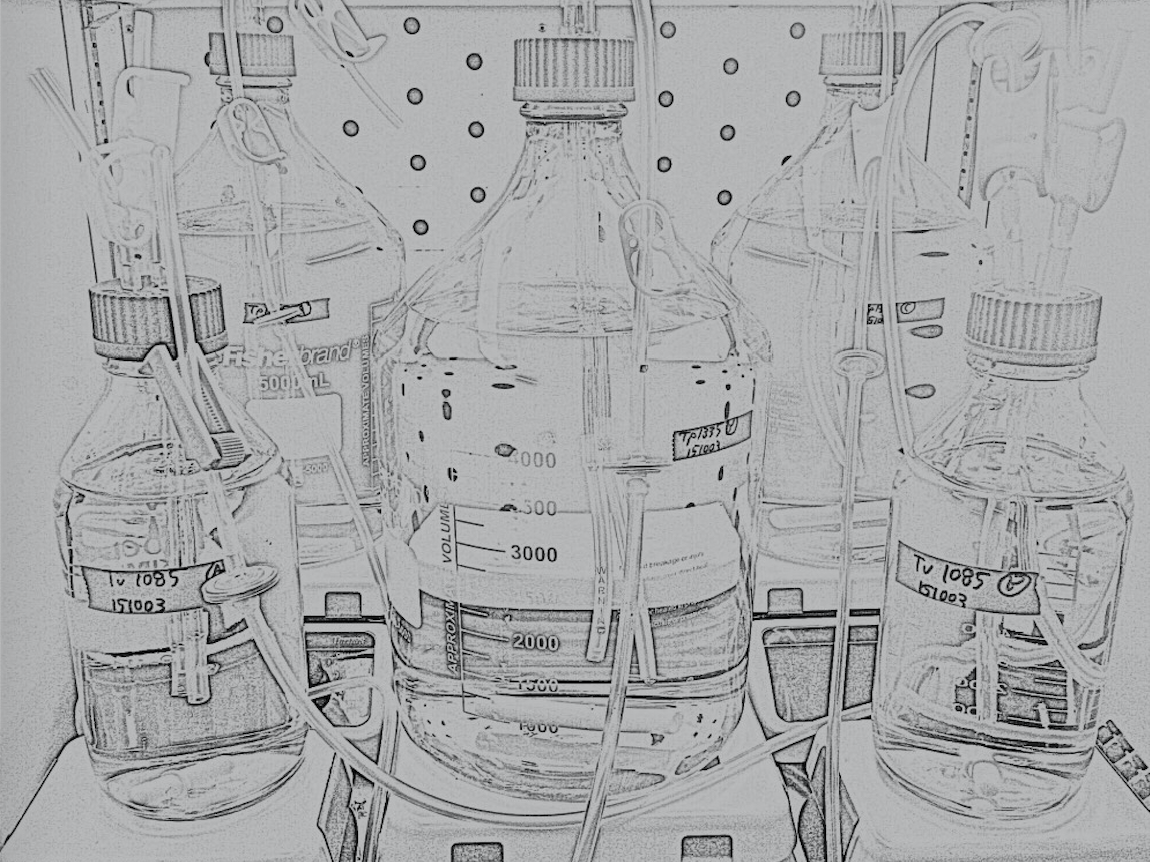 The Redfield ratio, the atomic ratio of carbon, nitrogen, and phosphorus (C:N:P) in phytoplankton and deep ocean waters, has often been treated as a constant 106:16:1. A new paper involving several CBIOMES co-authors presents compelling evidence for what causes this ratio to change within phytoplankton.

Biogeochemical cycles in the ocean are strongly affected by the elemental stoichiometry (C:N:P) of phytoplankton, which largely reflects their macromolecular content. A greater understanding of how this macromolecular content varies among phytoplankton taxa as well as in response to resource limitation may strengthen physiological and biogeochemical modeling efforts.

Based on painstaking laboratory experiments, the team demonstrates that despite their differing cell sizes and evolutionary histories, the relative decline in protein during N starvation was similar in all four species studied and largely determined variations in N content.

The authors also found that accumulation of carbohydrate and lipid dominated the increase in C content and C:N in all species during N starvation, but that these processes differed greatly between diatoms and prasinophytes. The authors suggest the far greater accumulation of carbohydrate with N starvation displayed by the diatoms as likely being due to their greater cell size and storage capacity, resulting in larger increases in C content and C:N. In contrast, the prasinophytes were found to display smaller increases in C and C:N that were largely driven by lipid accumulation.

In addition, the researchers found that variation in C:P and N:P was species-specific and mainly determined by residual P pools, which they interpreted as likely representing intracellular storage of inorganic P which accounted for the majority of cellular P in all species throughout N starvation.

Overall, the paper’s findings indicate that carbohydrate and lipid accumulation may play a key role in determining the environmental and taxonomic variability in phytoplankton C:N leading the authors to propose that this quantitative assessment of macromolecular and elemental content spanning several marine phytoplankton species can be used to develop physiological models for ecological and biogeochemical applications, a result with key implications for ocean biogeochemical modeling of the kind underway in CBIOMES.

“Demonstrating that the Redfield Ratio changes in phytoplankton aren’t terribly novel,” explains Liefer. “What our study sets out to show is the chemical basis for why it changes by providing a much more complete budget of macromolecules than previous work.”

Story image: “We measured things like total proteins, carbohydrates, and lipids; macromolecules familiar from nutrition facts labels on packaging for the food we eat,” says Justin Liefer, Assistant Professor of Biology/Geography and Environment at Mount Allison University in Canada and lead author. “People understand the ‘Nutrition Facts’ on a box of cereal but marine biologists are only just beginning to explore the partitioning of elements between the macromolecules that make up phytoplankton; the organisms that support nearly all marine life and regulate our planet’s climate.”