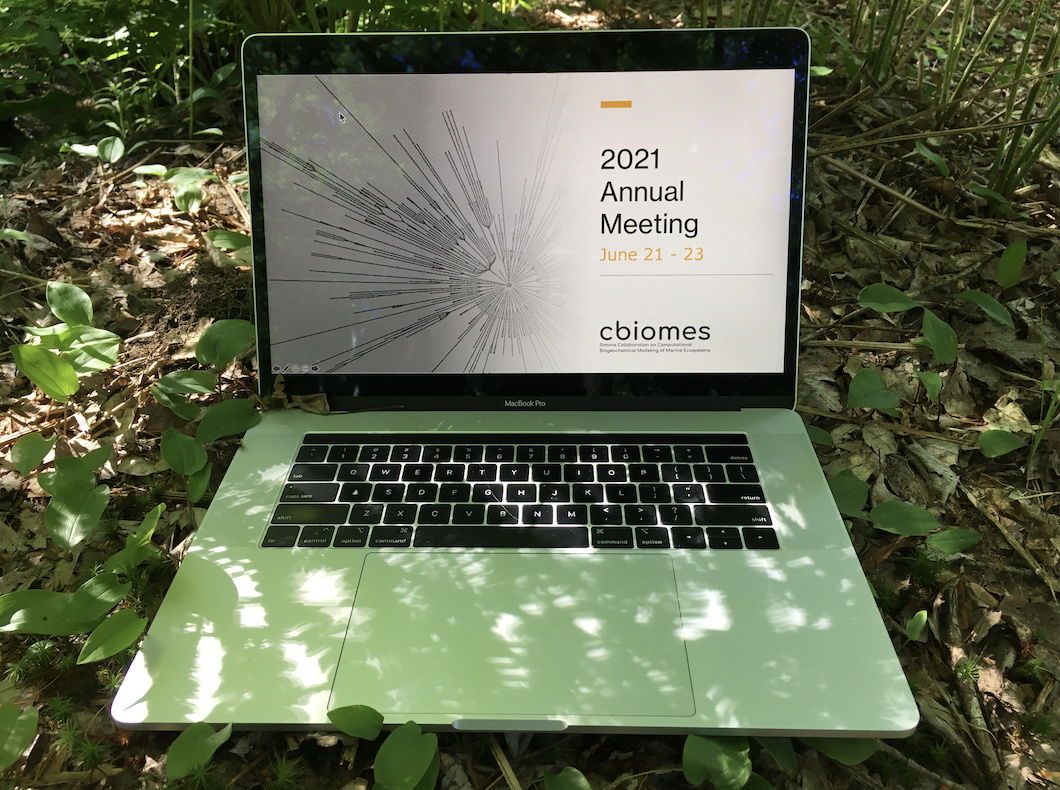 The 2021 CBIOMES Annual Meeting provided a short,  streamlined opportunity for members to refamiliarize themselves with progress over the past twelve months, learn in more depth about current activity, and hear and weigh ideas for new directions.

Programming wove together a half-dozen plenary talks with opportunities for group discussion around twice-daily hour-long poster sessions. To keep the live portion of the meeting a manageable length as well as to prime attendees for informed discussion, recorded microtalks introducing each poster, and PI group overview videos were made available for preview during the week before the face-to-face meeting.

Plenary presentations focussed on a half dozen areas of activity across the program. Stephanie Dutkiewicz, a Senior Research Scientist (and member of Mick Follows Group) presented work at the intersection of ecological theory and numerical simulation, subtitled “Interactomes in Sea (Biomes).” In a talk focussed on interactions beyond competition and predation that turn out to be important in structuring planktonic communities, examples she highlighted were the role of shared grazing and carnivory, both of which she and collaborators have been exploring in numerical model experiments using the DARWIN ocean ecosystem model. As Dutkiewicz explained, shared grazing leads to a reduction of one species when another species, which shares a grazer, increases and is a mechanism she believes could explain the notable reduction in Prochlorococcus seen in Gradients cruises moving across the North Pacific transition zone. Carnivory (also seen in the Gradients cruises, is the condition where enough resources are available to a predator’s predator that the predator’s prey experiences a reduced grazing pressure, allowing the prey species to increase in abundance.

Since the start of CBIOMES, Chris Edwards and his team have developed and analyzed multiple methods to constrain marine biogeochemical models with observations, each with its relative advantages and disadvantages in terms of ease of implementation, accuracy in the ocean state estimate, and computational efficiency. In his talk “Ecological Data Assimilation”,  Edwards shared some preliminary ideas around leveraging data assimilation to help understand the marked transition of Prochlorococcus concentrations along Gradients cruises in the North Pacific subtropical/subpolar gyre regions. By potentially constraining the latitude of the observed transition, Edwards believes data assimilation may help towards a clearer understanding of the relative contributions of physical and biological drivers of this feature and its interannual variability.

After a fast-paced overview of the genesis and current state of the now mature open-source data portal the Simons Collaborative Marine Atlas Project (CMAP), Ginger Armbrust (UW) devoted the first half of her talk to encouraging users to contribute data (their own but also whole or even partial datasets they encounter in the literature) as part of a “virtuous circle” to help further grow – and grow the usefulness of – CMAP, taking time to explain the data ingestion process. Armbust then went on to highlight the accessibility and usefulness of the extensive library of software packages and especially the data visualization tools CMAP includes, demonstrating, in particular, the data co-localization feature which allows users to interpolate data (subject to the user’s chosen tolerance), to eg a location along a cruise track, with ease.

Erin Bertrand is an Associate Professor and NSERC Tier II Canada Research Chair in Marine Microbial Proteomics in the Biology Department at Dalhousie University, Halifax, Nova Scotia. She is also a Simons Early Career Investigator in Marine Microbial Ecology and Evolution. Her lab at Dalhousie University employs physiological, biochemical, and bioanalytical approaches towards an improved understanding of controls on marine microbial activity and how microbes influence major biogeochemical processes in the ocean in particular metaproteomic measurements. In her invited presentation, Bertrand described her Lab’s work to develop and apply cellular protein allocation models, define proteomic traits of microbial groups, and quantify abundance and activity patterns.

In “Macromolecular and Elemental Composition of Marine Microbes”, Zoe Finkel (Dal) summarized her group’s work seeking to determine the rules that govern the size- and species-level differences in elemental and macromolecular composition of marine microbes under different growth rates and environmental conditions. Using the preliminary laboratory data she and her team have been painstakingly collecting over the past four years to assess several of the “rules” that Mick Follows and associates have developed in previous models (in particular in Inomura et al. 2020) Finkel noted that although several assumptions held, there exists considerable variability in how RNA increases relative to protein with growth rate across taxa that is not well understood. While affirming that work is progressing towards developing a reasonable understanding of the elemental and macromolecular composition of phytoplankton, Finkel emphasized that there remains much to be learned about the elemental and macromolecular composition of the marine bacteria, marine archaea, and zooplankton calling for more work.

In his presentation, USC postdoc Jesse McNichol (Fuhrman Lab) described how universal PCR primers combined with unfractionated seawater samples provide a comprehensive description of seawater microbial communities. Using the BioGEOTRACES dataset as an example, he showed how direct comparisons can now be made between the DARWIN model and real-world data and discussed future collaborations involving the Follows lab and the CBIOMES Provinces working group using new datasets currently being generated.

Justin Hyun (Bien Group, USC) spoke about Ocean Mover’s Distance (OMD), a method for flexible comparison between distributions in the ocean, a transport method to optimally partition deviations into quantity, space, and time components. Takeaways from his talk included that optimal transport is a flexible measure that can be used to compare many different spatiotemporal measurements of the ocean, and that, in the context of the North Pacific he and his collaborators have found that model and remote sensing Chlorophyll data (at different temporal scales) measured by OMD often exhibit large differences in the North Pacific with consequences for eg the interpretation of eg SCOPE Gradients data.

You can access recordings of all the presentations, posters and microtalks, and group overviews here [login required]

The 2022 meeting is scheduled for June   21 – 23 (corrected) when we hope we will see a return to the Simons Foundation in NYC.